At 16 km from Kavala, Nea Peramos competes in beauty with the most famous tourist places of Greece, as it has amazing beaches and unique taverns with the best fish in the area. Opposite the beach of Nea Peramos, vacationers see a rocky islet known as Fidonisi. From Nea Peramos there is also a ferry connection with Thassos.

The Dunes, with their crystal clear waters, are located 18 km from Kavala and 2 km from the area of ​​Nea Peramos. It has a length of 3 km and combines fine sand with crystal clear waters. This has the effect of creating in the visitor the illusion that he is on an exotic beach! The beach of Ammolofos is ranked in the list of the ten most beautiful beaches in Greece and for this reason it attracts crowds every summer.

In addition, on the internet it has taken the fifth place while it has been awarded the blue flag for its clear waters. The beach is divided into three parts with the presence of rocks and their names starting from the east to the west are: first Dunes, second Dunes and third Dunes. It has an organized beach with beach bars, sunbeds, umbrellas and free parking. Admission to all beaches is free. For bathers who prefer something calmer and more relaxed, they can again visit the Dunes to “explore” their untapped sides. One can reach the intercity bus to Nea Peramo, and from there walk or take a taxi. During the summer there is a direct route through the KTEL.

On the western slopes of Mount Falakro (23 km. From Drama) is the cave of Mara or Kokkinogion of Drama, where the sources of the river Aggitis, a tributary of the Nestos, are located. The waters of Aggitis follow an underground path inside the cave. Making it an attraction that every visitor should explore. Stalactites with wonderful colors, strange shapes and sizes but also stalagmites that exist in it, give a really beautiful image to anyone who is there. Near the entrance of the cave, which is the source of the river, is the ‘mill hall’ with the watermill of the early 20th century. which supplied drinking water to the surrounding settlements.

Excavations in the cave brought to light findings from the Neolithic era, such as tools and pottery fragments. The cave can be visited in the spring, when the water level allows. 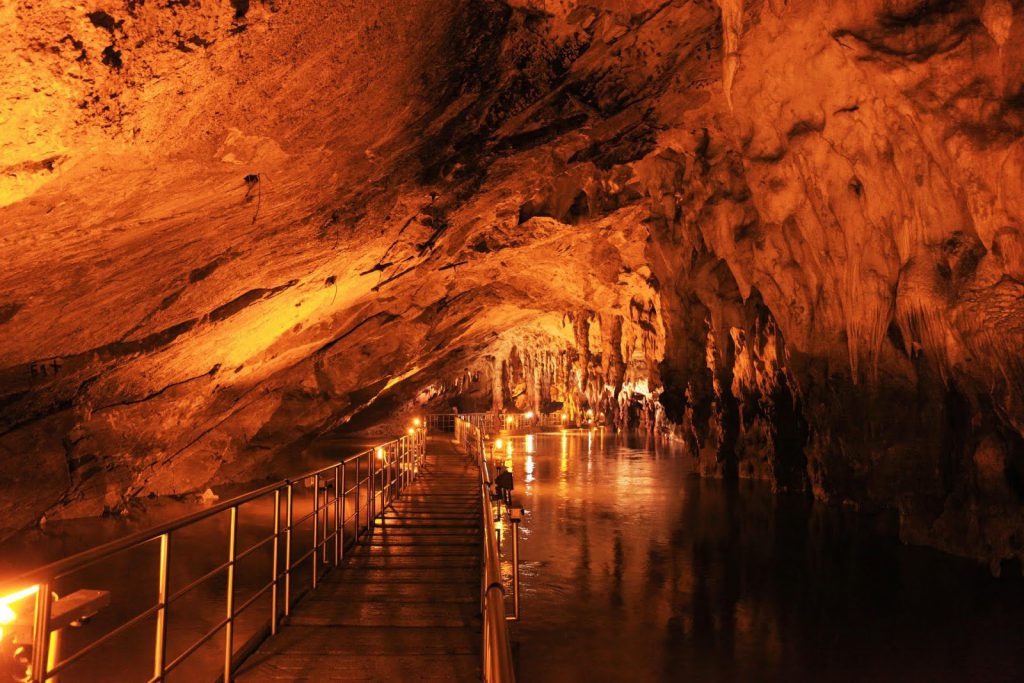 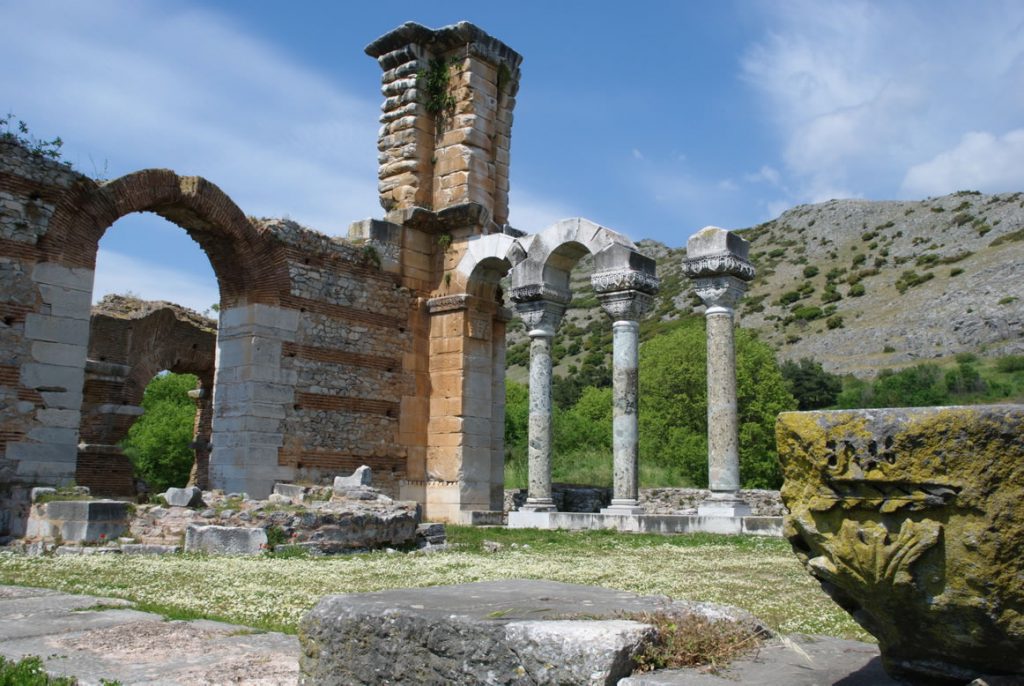 The ancient city of Philippi

The ancient city of Philippi was founded on the outskirts of the members that covered the southeastern part of the plain of Drama. The city of Philippi is the most important archeological site of Eastern Macedonia. Its first inhabitants were settlers from Thassos, who founded the colony of Krinides in 360 BC. The city flourished during the Hellenistic years.

The Thassian settlers founded the colony knowing the wealth of the region in precious metals, timber and agricultural products. Very quickly (365 BC) the new colony, threatened by the Thracians, seeks the help of Philip II, King of Macedonia.

The picturesque port of Nea Iraklitsa

At 13 km from Kavala the picturesque port of Nea Iraklitsa gives a unique magic, making it one of the most beautiful villages in the area. It has a wonderful blue sea with a sandy beach which can be enjoyed either as a swimmer or eating in one of its many wonderful taverns. The beach awarded with the blue flag until 2012 is organized and has parking. The entrance is free. The organized camping Paradiso is located in the area. Can someone who does not have transport via the intercity bus to Nea Peramo. 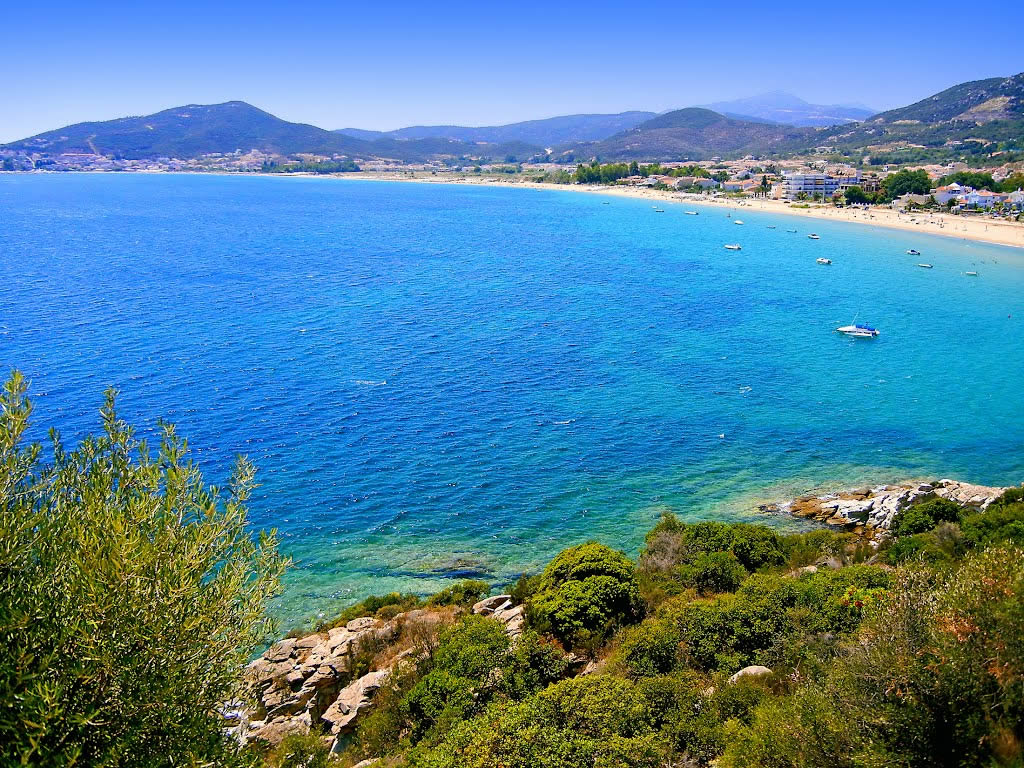 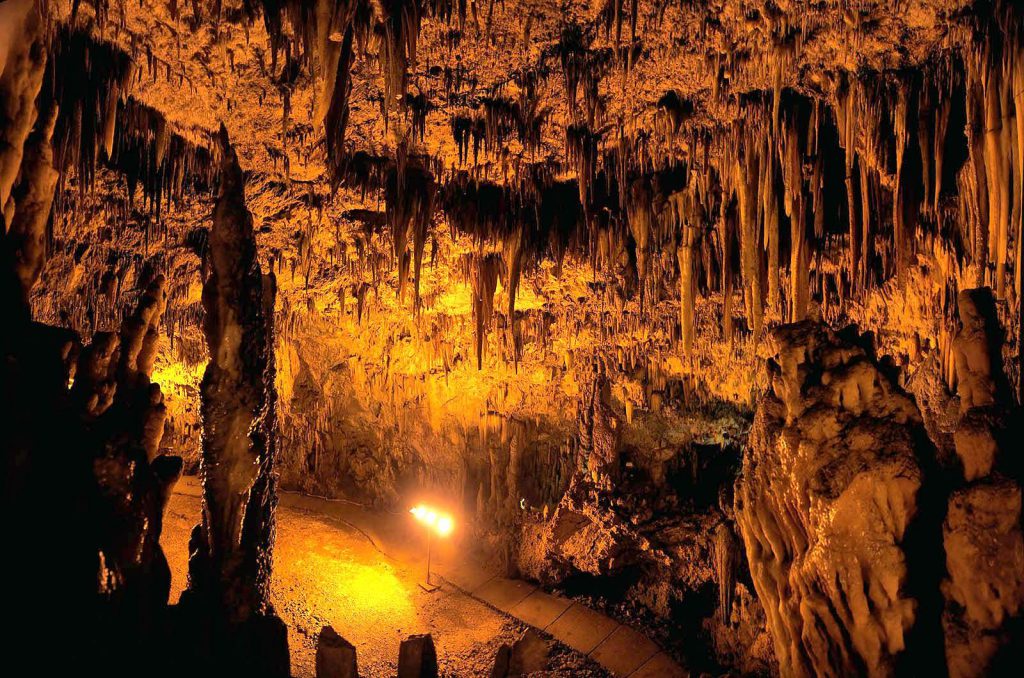 The cave of Alistrati is located 50 km SE. of Serres, 25 km N.D. of Drama and 65 km NW. of Kavala. Access to Alistrati is from Thessaloniki via Serres or Asprovalta and from Kavala via Drama.

Mount Paggaio has been known since ancient times because of its mines. The demonic and extremely capable general Philip II, father of Alexander the Great, took full advantage of the famous mines and created one of the most militant armies of the time, formed alliances and generally gave a solid foundation to his kingdom. against the Persians which had as its purpose from the beginning, which of course was undertaken from its inception by his son and successor Alexander the Great.

The ancient mines have been known since antiquity and mentioned by many writers. According to one view, the word Paggaio means Pan + earth, one of the precious metals that he generously gave to people for many centuries. But Paggaio hides its secrets well. 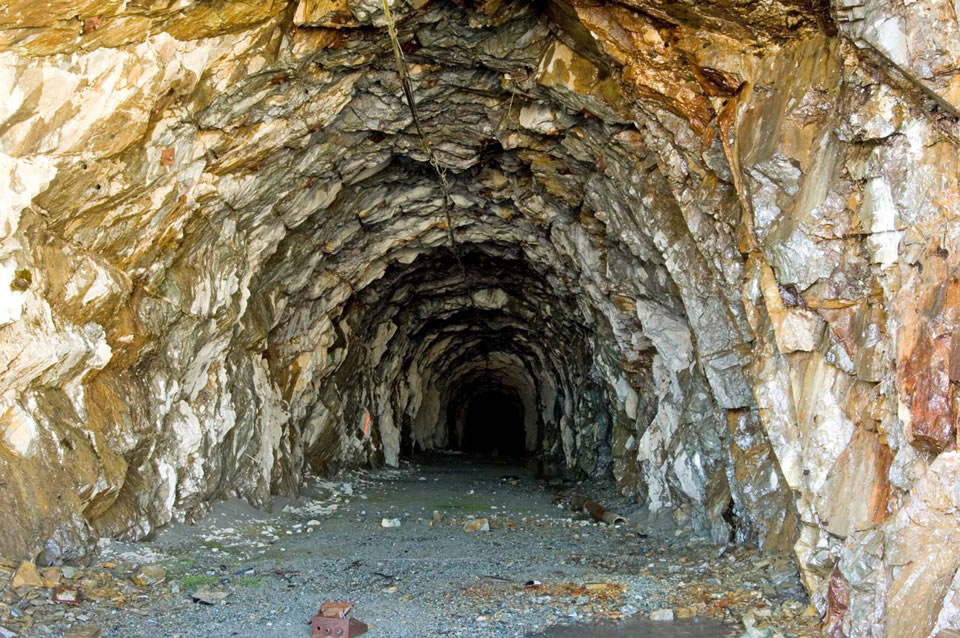 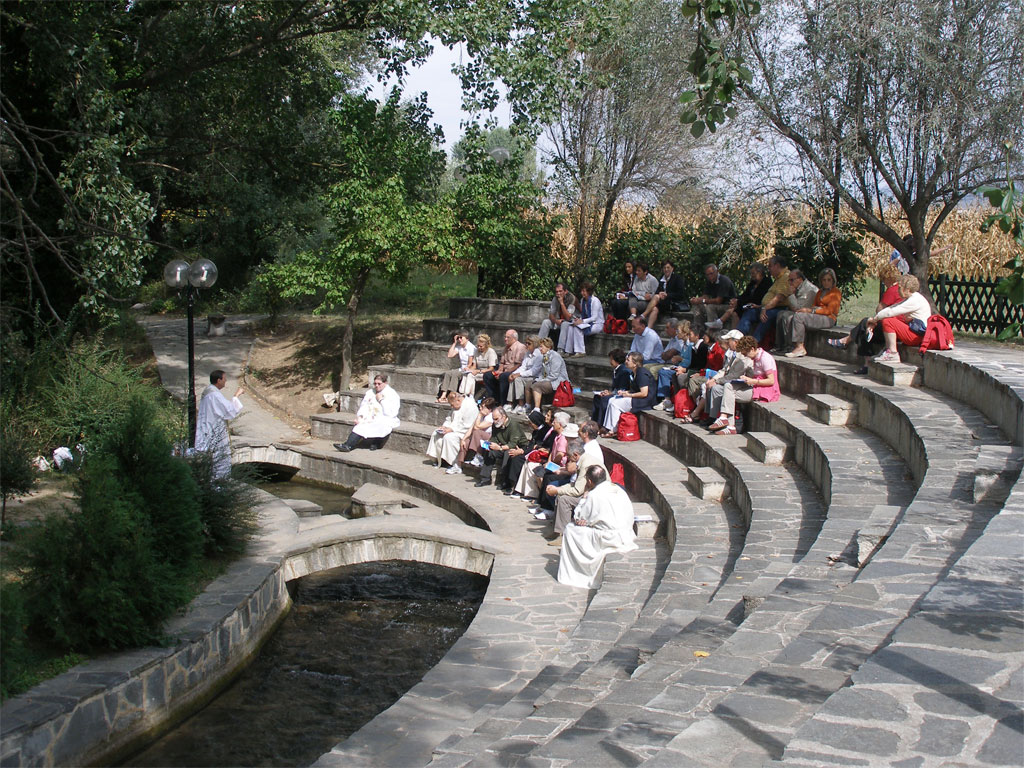 The Baptistery of Agia Lydia

The Baptistery of Agia Lydia which is a pole of attraction for Christians all over the world, a place of pilgrimage for the descendants of the Philippians, a sacred place of prayer and a place of worship consecrated by the Apostles. 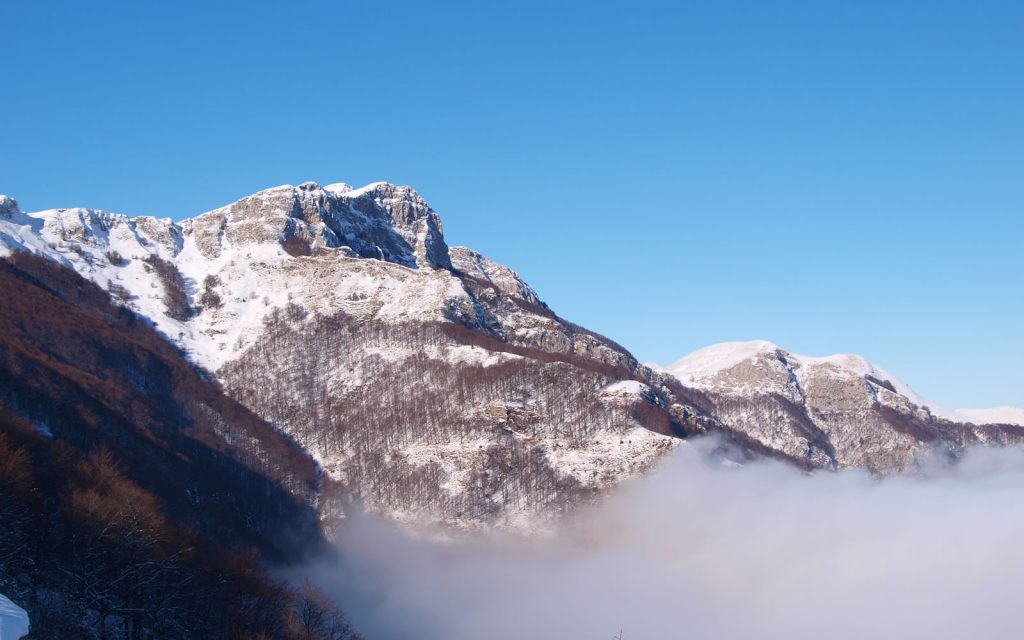 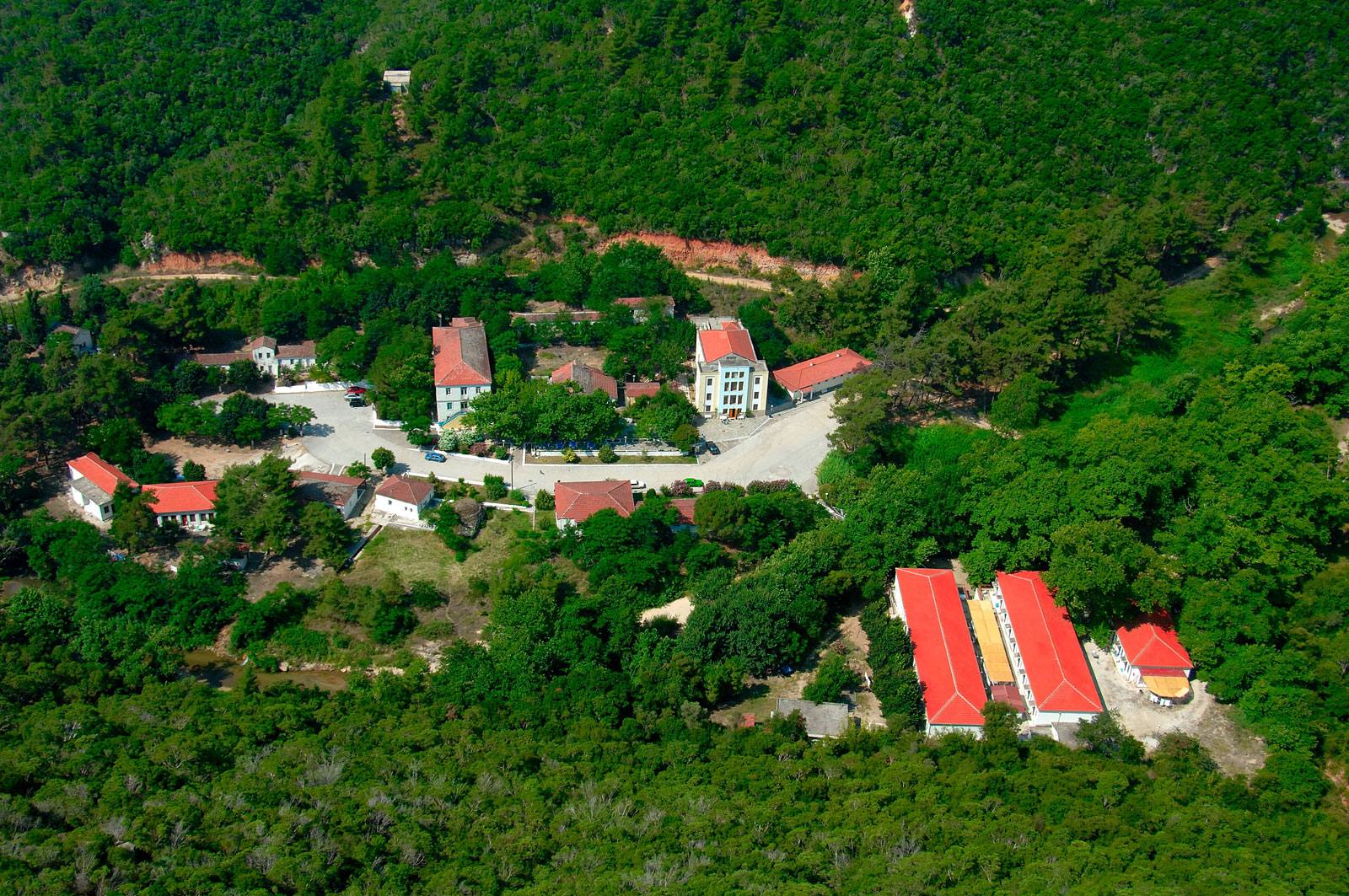 The thermal baths of the Free

At a distance of 45 km from the city of Kavala are the thermal baths of the Free. These thermal waters cure many diseases, even chronic ones. Sulfur sources are ideal for musculoskeletal disorders, circulatory skin diseases, inhalation therapy for asthma, etc.

In the baths today there is a physiotherapy clinic which operates by appointment and there is medical coverage 24 hours.

The clay therapy center of Krinides

The clay therapy center of Krinides is another valuable place for the health of every human being. The place where today man takes care of his health, with the use of healing clay and thermal water, from tens of thousands of years ago until today is a ‘sustainable laboratory of nature’ that prepares with great accuracy this valuable, for health us, material. The worldwide fame of the Mud Fountains is due to the stories but also to the testimonies of tens of hundreds of citizens from every corner of Greece and abroad who were cured of chronic diseases and pains. The Museum of Amphipolis

The Museum of Amphipolis is a multifaceted set of spaces and human resources with many different functions, in relation to the protection and promotion of antiquities. In the exhibition of the Museum one can get acquainted with the historical course of the ancient city and its immediate area. In its warehouses and laboratories the storage is ensured and the preservation and the study of the findings that the archeological excavations bring to light are carried out.

The monastery of Panagia Paggaiotissa

On the other side of Paggaio in Kato Hortokopi, a picturesque village of Paggaio and on the top of a hill, is beautifully located the monastery of Panagia Paggaiotissa. The location was chosen by a Pontian family, after a divine vision, which revealed to them the place where the holy icon was located, brought by our ancestors from the unforgettable homelands. This place is the hill where the monastery is located until today. The church of the monastery, where the services are held, is dedicated to the Assumption of the Virgin Mary and celebrates on the 15th of August. 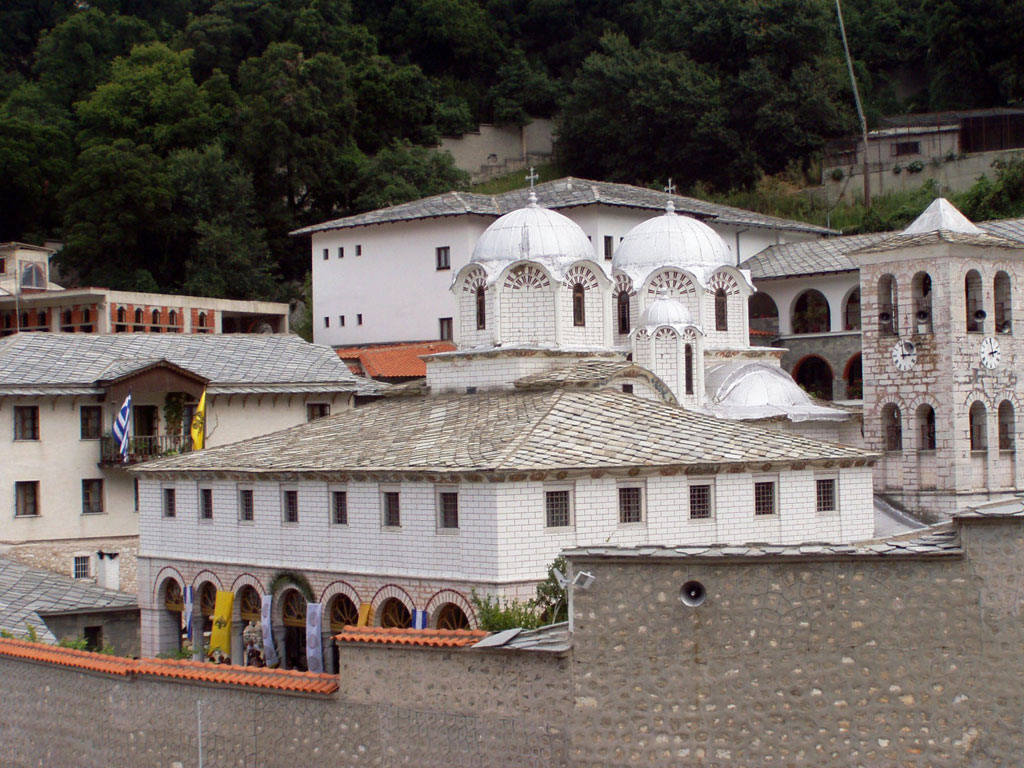 Starting from the nearest places, the Holy Monastery of Eikosifoinissi is a world pilgrimage for hundreds of tourists.

The Monastery of Eikosifoinissi is located at an altitude of 753 meters, on the north side of Mount Paggaio. It is located on the Serres-Kavala road, on the borders of the two Prefectures. Administratively it belongs to the Prefecture of Serres, but ecclesiastically it belongs to the Diocese of Drama. The foundation of the Monastery dates back to the years of Bishop Philip Sozontos, who took part in the Fourth Ecumenical Council of Chalcedon (451 AD).

According to tradition, the bishop of Sozon founded, around 450 AD, a temple and a monastic settlement at Vigla, near the monastery. This monastic settlement was abandoned over the years and the Monastery was essentially founded by Agios Germanos, in the 8th century.

There are three versions of the name of the Monastery:

The owner of the Monastery, Saint Germanos, was located in a place, a small oasis outside the Holy Monastery of Timios Prodromos in the Holy Land, where he had twenty (20) palm trees, where he received an order from the angel of the Virgin for the construction of the Monastery and in remembrance of the site he named it “Panagia the Eikosifoinissa”.
The famous lyricist of the 18th century, Caesar Dapontes, calls it “Kossifinitsa”, because according to tradition, a kossifos (blackbird) led the holy German to the place where Agiasma gushes to this day under the chapel of St. Barbara.
The abbot of the Monastery of Chrysanthos in (1782) mentions that while Saint Germanos, after the construction of the monastery, was looking for a suitable board to become the image of the Virgin Mary. She miraculously offered him the image of Her that still survives, which shone and emitted “palm”, that is, reddish, light. From this, the term “Eikosifoinissa” prevailed.

This website uses cookies to improve your experience while you navigate through the website. Out of these cookies, the cookies that are categorized as necessary are stored on your browser as they are essential for the working of basic functionalities of the website. We also use third-party cookies that help us analyze and understand how you use this website. These cookies will be stored in your browser only with your consent. You also have the option to opt-out of these cookies. But opting out of some of these cookies may have an effect on your browsing experience.
Necessary Always Enabled
Necessary cookies are absolutely essential for the website to function properly. This category only includes cookies that ensures basic functionalities and security features of the website. These cookies do not store any personal information.
Non-necessary
Any cookies that may not be particularly necessary for the website to function and is used specifically to collect user personal data via analytics, ads, other embedded contents are termed as non-necessary cookies. It is mandatory to procure user consent prior to running these cookies on your website.
SAVE & ACCEPT